11 Aug What surviving the Grouse Grind taught me about life

Posted at 18:00h in Anna's Musings by Anna Ludwinowski 0 Comments

Last year, my son Matthew and I decided to do the Grouse Grind in North Vancouver. Ok, I mostly decided and he kinda got coerced into doing it (I may have promised a treat at the end!).

I’d never done it before and it just seemed like such a “Vancouver” thing to do, so why not?

I knew that it was a steep vertical climb to the top, up the side of Grouse Mountain but I can’t really say that I was fully aware of what that looked like. We asked Google and found out that it was 2.9km trail (seemed reasonable), that it had an elevation gain of 2800 feet (sounded steep) and that the Grouse Grind was affectionately referred to as Mother Nature’s Stairmaster.

Hmmmm was this still a good idea?!

Over the next 2 1/2 hours, something happened. Not sure if it was the overall fatigue or thin mountain air but I started to draw comparisons between our climb and our journey in life itself.

Life often feels like an uphill climb, maybe even the proverbial “grind” but you just might learn a few things along the way. 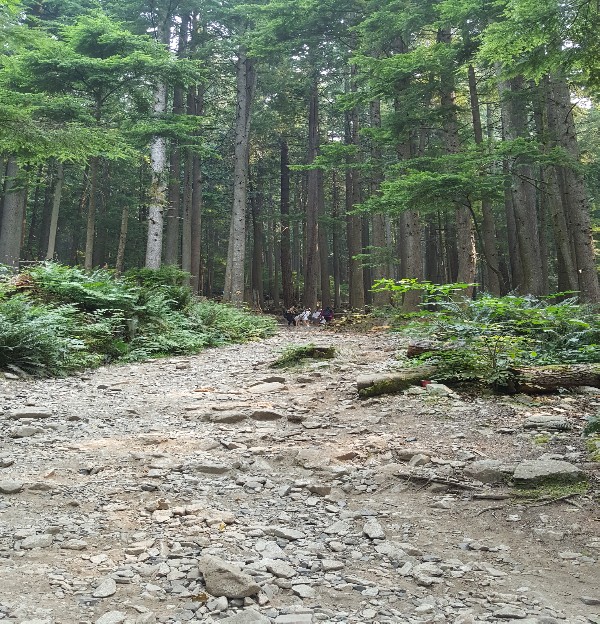 To say I was a little excited about our hike would be an understatement!

It was that anticipation of something new mixed with a dash of uncertainty about what lay ahead. What was the trail like? Was it going to be crazy hard, a walk in the park or something in between? One thing was certain, this hike was going to be an adventure!

That’s kinda how we start off our adult lives too, isn’t it? We’re just full of boundless energy in our “early years”. There are just so many ideas, options and possibilities! The sky’s the limit and there’s nothing we can’t do in this life that lies ahead of us. So all so fresh and new and exciting!

We were feeling pretty good as we reached the quarter marker. The enthusiasm was still there even though the trail was starting to get progressively harder. Our legs were still feeling good and we still had lots of water, despite the warm weather.

We’d met a few other adventurous souls along the way. Some were prepared for their Grouse Grind journey, with backpacks, water bottles and good hiking shoes. Others, not so much, as flip flops on their feet would indicate otherwise! Some even turned back realizing that perhaps this wasn’t a journey they were ready to take.

We all start out with the best of intentions for ourselves. We all want success in our lives, whatever that may look like to each of us. Sometimes we’re prepared for what life has in store for us. Other times we’re not. Sometimes the path we thought was the “right one”, just isn’t. And that’s ok. It’s all part of the process, isn’t it? 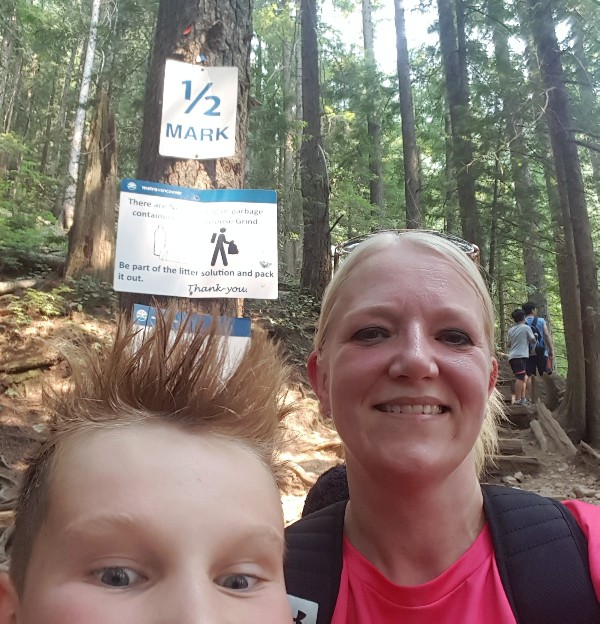 To be honest, I met the halfway marker with mixed emotions. On one hand, I was elated to see we’d made it this far. On the other hand, that meant that we still had to go the same distance that we had just done…yikes!

We decided to take a longer break and refuel with some snacks. This also gave us an opportunity to chat with other resting hikers. Some had done the Grouse Grind before and offered us sage advice like “keep a steady pace”, “refuel often” and “it’s not easy but you’ll appreciate what you’ve accomplished when you reach the top”. That and the trail mix was the fuel we needed to keep going. On to the top!

Life can feel definitely feel challenging sometimes. Especially when it gets hard. And it does get hard and even unbearable at times. Taking that break, to reassess, to get that needed support can often be just what we need to keep us going our journey. And don’t forget to take a look back sometimes too…you’ve come a long way, baby!

We were so focused on this last leg of our journey that we almost missed the 3/4 marker!

One kind soul had told us that the trail got easier after the halfway mark. Well, they lied! In fact, it got harder, much harder. The incline became more, well, vertical! There was a point where I stopped and just stared up. I really wanted to cry. It felt like there was nothing left in the tank.

Then a voice behind me said “Look Mom, we’re almost there!!”

It does seem that when you feel you have nothing left to give or the odds are stacked against you, you truly find that internal strength to keep going. It’s amazing what we can accomplish when we don’t try to talk ourselves out of it.

Those around us will help, encourage and support but they cannot do it for you. That’s on you.

Oh what a feeling when we finally reached the top of the Grouse Grind! We were hot and tired but thrilled that we had made it. The hike had been tough, no doubt about it but achieving our goal was a pretty awesome feeling. And I did it with my favourite hiking buddy!

So what did I learn from surviving the Grouse Grind?

That life can be a grind. It can be hard, relentless and often unforgiving. Some days will seem impossible to overcome. No matter what difficult trails lay ahead in your life, know that it’s in you to succeed.

Feeling inspired to try the Grouse Grind yourself? Check out their website for more details.

Once an unhealthy overweight Mom, Anna took desperate action to turn her life around and became a client at a fitness studio. After 2 years, she became the new owner! A new found love of fitness, clean eating and overall wellness has inspired her to start this blog. When she's not at Emerge Fitness, she's likely at her other business, Essential Packaging Inc where she works with her husband, David. She likes to hike with her son Matthew, hang out with her chickens and her constantly shedding dog, Soda.